The World Health Organization estimates that vaccines save 2-3 million lives worldwide every year.

Vaccines have saved more lives in Canada than any other medical intervention in the past 50 years. Before we had vaccines, many Canadians died from diseases that we can now prevent. Vaccines also prevent diseases that are rarely deadly but can cause pain and long-term health problems.

This graphic from the Public Health Agency of Canada shows just how effective vaccines have been at reducing disease in Canada. 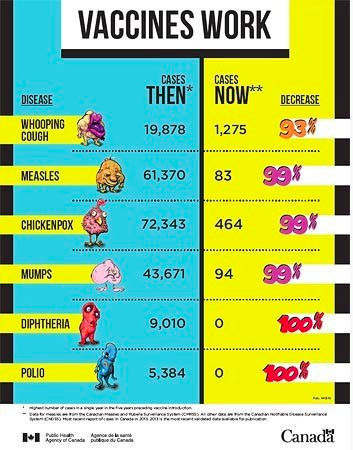 2. Vaccine-preventable diseases are still out there

Many of the diseases vaccines prevent are now rarely seen in Canada, mostly because of vaccine programs. But the germs that cause these diseases still exist, and we still see some of these diseases such as pertussis (whooping cough), measles, and mumps in small numbers in Canada. If vaccination rates drop, these small numbers of diseases could quickly become outbreaks and epidemics of disease. We have seen this happen in other countries:

Also, many of the diseases that are now rarely seen in Canada, such as polio, diphtheria, and measles, are still quite common in other countries. These diseases are only a plane ride away. Without protection from vaccines, these diseases would spread quickly, and outbreaks would occur. We saw this happen recently in a B.C. community with low vaccination rates:

Until these diseases are eliminated completely, we need to keep vaccinating against them to protect ourselves and others.

It’s just like a boat that has a slow leak. The water is the disease, and a bucket for bailing is the vaccine. Before we started bailing out the water (vaccinating), the boat was filled with water (disease). We have been bailing (vaccinating) fast and hard, and now the boat is almost dry. We could say, "Good. The boat is dry now, so we can throw away the bucket (stop vaccinating) and relax" — except that the leak hasn't stopped (the diseases are still present). Before long, we'd notice water (disease) seeping in, and soon it might be back up to the same level as when we started. Unless we can "stop the leak" (eliminate the disease), it is important to keep bailing (vaccinating).

Vaccines don't just protect the people getting vaccinated; they protect everyone around them too.

The more people in a community who are vaccinated, the harder it is for a disease to spread. If a person infected with a disease comes in contact only with people who are immune (have been vaccinated), the disease will have little opportunity to spread. The type of protection created when most people are vaccinated is called “herd immunity." It means that many of us are protecting each other, and especially the most vulnerable among us, such as:

When vaccination rates drop in a community, it’s easier for a disease to spread from person to person and cause an outbreak.

Some parents who decide not to vaccinate may believe that herd immunity will protect their children. Herd immunity does not guarantee protection for unvaccinated children. If you live in an area with low immunization rates, your child will not be protected through herd immunity. Further, herd immunity does not protect against all vaccine-preventable diseases. For example, tetanus is a serious disease caused by germs found in dirt, dust, and soil. It does not spread from person to person. Any child not vaccinated against tetanus is at risk. Even a minor cut or wound that has a tiny bit of soil in it can cause an infection. Over 10% of children and adults who get tetanus will die, even with the best intensive care.

Vaccines also protect future generations. Just like we are no longer at risk of smallpox, thanks to vaccines, in the future, we may be able to wipe out other diseases, like polio and measles. To eliminate these diseases in the future, we need high vaccination rates now.

What is Herd Immunity?

Video courtesy of Health Canada. All contents may not be reproduced without permission and are copyright of Her Majesty the Queen in Right of Canada, Represented by the Minister of Health, 2012.